During their international rotation, a few residents were greatly inspired by the dedication and resolve of the medical students from the Catholic University of Mozambique (UCM, for its initials in Portuguese) in Beira, Mozambique, many of whom came from very humble backgrounds and attended the university on full scholarship. Due to financial circumstances as well as limited availability, many of these medical students could not afford textbooks. They were enthralled with the residents’ copies of the Oxford Handbook of Tropical Medicine. They considered these to be particularly useful as many of them planned to practice independently in rural areas after graduation, with limited access to other resources. Thus, the idea of a book fund was born!

In 2015, residents and faculty from the Global Health and Underserved Populations Track raised approximately $800 and donated one Oxford Handbook of Tropical Medicine to each of the 32 members of the graduating UCM class!

The following year, a recurrent book donation was established as a yearly Spring service project for the entire Internal Medicine Residency. Residents and faculty then raised a total of $1075 for Oxford Handbooks for the Malawian and Mozambican medical students!

The donations for the Mozambican medical students were performed via Teaching-aids at Low Cost (TALC), which is a trading company and development charity combined that currently supplies over 10,000 health workers with health materials, including low cost health text books, videos, CDs, and weight charts, in the poorest communities in Africa, Asia and Latin America.

If you are interested in donating to this recurrent book fund, please email Thuy Bui at buit@upmc.edu. 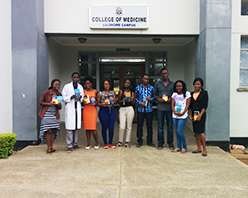